The Kingdom, as the county of Kerry is known, is an unmissable part of any tour of Ireland.

‘The Kerry Camino’ is a community initiative to promote walking holidays from the county town of Tralee across the Dingle Peninsula, specifically the walking route also known as The Dingle Way. The Kerry Camino was launched in June 2012, when Tralee man Michael O’Donnell came up with the idea. Now, a group gathers annually to complete a guided walk over the May Bank Holiday weekend, although the Dingle Peninsula is popular for walking holidays all through the summer months, and you can walk this route any time you please.

Grace O’Donnell, a former mayor of Tralee, and member of the Kerry Camino committee says, “The first year we started we maybe had 35 people, that was up to 450 people last year and we capped it at that for safety reasons.”

Funds raised from the group walk on the May Bank Holiday weekend have been used to erect proper signage along the route and print the passports and certificates for walkers. Walkers can pick up a free pack from the tourist office in Tralee, which includes a Pilgrim’s Passport logbook, to get stamped at stamping stations along the way, to commemorate the journey. The walker can then get a certificate at the end of their walk in the Dingle Tourist office. 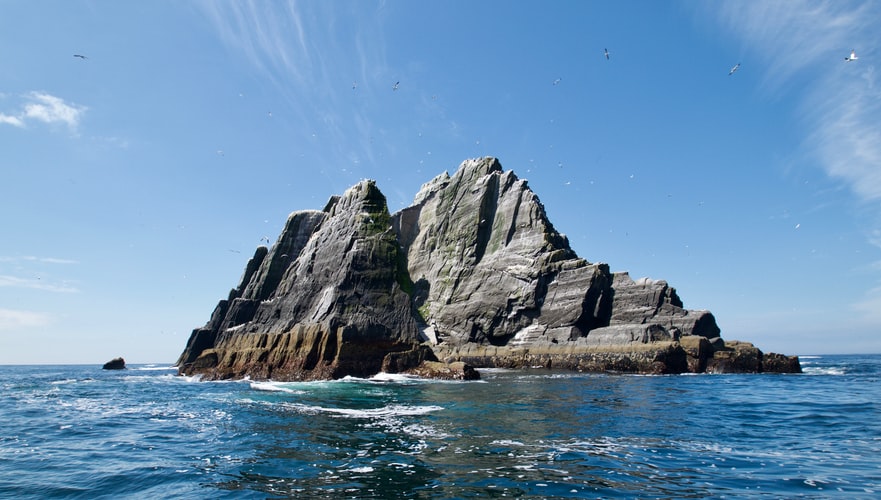 The trail follows in the footsteps of St Brendan the Navigator, taking in rugged mountains and coastal scenery over a three-day walk. The final destination is the Church of St. James in Dingle. St Brendan is said to trek the route with some of his fellow monks between 512 AD and 530 AD, in a journey of fasting, prayer, and contemplation. From the Dingle Peninsula, St Brendan sailed in a small craft to the Island of Iona, and from this base, he continued his journeys, eventually landing on the shores of what he called the New World and we now know as The Americas.

In the 1970s the adventurer Tim Severin recreated Brendan’s legendary voyage in a boat fashioned in leather, in the manner Brendan’s boat would have been built in 6th century, setting sail from Brandon Creek on an arduous 4,500-mile (7,300km) voyage, which took just over a year. On the voyage, they noted numerous parallels to the Latin manuscript record of St Brendan’s journey, Navigatio Sancti Brendani Abbatis (The Voyage of Saint Brendan the Abbot), thus adding credence to the legend that Brendan reached the Americas 500 years before the Viking Leif Erickson and 900 years before Christopher Columbus.

The logo of the Kerry Camino is based on a pewter scallop shell with a bronze-gilded statue of St James mounted on a brooch, which was found during a 1992 archaeological dig at the ruins of Ardfert Cathedral. The Cathedral was associated with St. Brendan, patron saint of Kerry, and the symbol of the shell has long been associated with St. James—when found in a grave it suggests the deceased person had been on a pilgrimage to the apostle’s burial place in Santiago.

Grace says, “We break it down into three days because it’s doable over three days. A very good walker would do it in two, but you to do it comfortably we recommend three days.”

“The passport and certificate are available to anybody who walks it at any time of year, from the tourist offices in Tralee and in Dingle. People can also contact the Kerry Camino committee through their website or Facebook and we will do our best to help them and assist them in whatever way we can.” 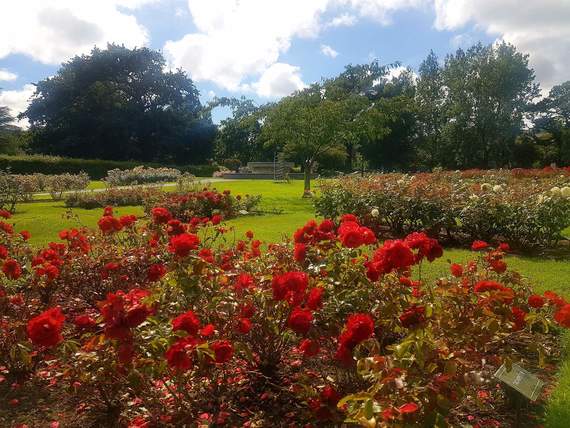 The Rose Garden in Tralee town.

The first leg of the route begins in Tralee town near St. John’s Church on Castle St. and goes out by the Tralee Ship Canal to the village of Blennerville and its landmark windmill. The visitor center at the Blennerville Windmill also includes an emigration display, a model railway, and a bird-watching platform. Blennerville was the main port of emigration from County Kerry during the Great Famine (1845-1848) and was, during those years, the home port of the famous emigrant barque “Jeanie Johnston”.

Continuing on through Blennerville you head out by quiet country lanes, rising up into the Slieve Mish mountain range. After a few kilometers, the trail opens out into the open mountainside, across marshy land dotted with red sandstone rocks which make ideal stepping stones (gaiters are advisable!).

The walk passes the entrances to glacial valleys, crisscrossed with mountain streams, and sights along the way include a Victorian-era reservoir and the preserved ruins of Killelton Oratory and Famine Village.

The final part of this section crosses the Finglas River, and heads downhill towards the village of Camp (from the Irish ‘An Com’, meaning a gap in the mountain). Camp makes an ideal overnight location, with friendly pubs and welcoming lodgings to end a long day. 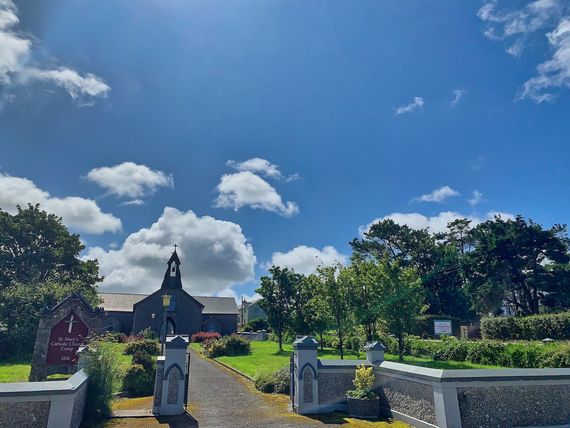 This next part of the Kerry Camino route is easier terrain, taking in quiet minor roads. The route heads in a south-westerly direction gradually rising out from the valley, with majestic views of Caherconree Mountain (835m) and the megalithic fort, before descending towards a small plantation of coniferous trees and eventually joining a minor back road heading south by the Emlagh River. Swinging around to the west, a spectacular view is revealed of the ironically named, incredibly long Inch Beach. It’s an ideal point for a break at the cafe or, stock up in the shop for a beach picnic. Film fans may recognize this famous setting, where parts of Ryan’s Daughter was filmed at the end of the 1960s.

Setting off again, the walk gradually edges its way inland towards Maum at a height of 180m above sea-level. Rounding the small summit of Knockafeehane, there is a spectacular view of Lough Annascaul in a  dramatic U-shaped glacial valley. You may also see ancient standing stones in the fields along the way here. The road then stretches in a straight run towards the village of Annascaul, famous as the birthplace of Antarctic explorer Tom Crean. If you’re spending the night in the village stop into the South Pole Inn for a nightcap—the atmospheric pub Crean once owned is full of fascinating photos and memorabilia.

The final leg of the journey, from Annascaul to Dingle enjoys wonderful views, before coming to the final panorama of Dingle town and harbor set in front of the Atlantic Ocean.

Descending towards sea level you will see the ruin of the 16th-century Minard Castle and views across Dingle Bay towards the Iveragh Peninsula. Before reaching the village of Lispole you will see a mountain range to the north, including the peaks of Croaghskearda (608m)and An Cnapán Mór (649m). Later on you cross the Garfinny River and heading south-west you’re on the final stretch to Dingle, taking in some of the epic views of the famous Conor Pass mountain road on the final stretch.

The 16th-century Minard Castle and views across Dingle Bay.

Dingle awaits at the end of the journey, with lots to see and do, and a great selection of restaurants and local crafts shopping.

If you can, stay a few days and enjoy trad music in the pubs, a trip around the Slea Head Drive, a boat trip to the Blasket Islands, and the unique atmosphere of this buzzy small town.
Source: IrishCentral.com